2021 September 24
Media Release
The proof is all around us – The First Republic is Finished.
Becoming a Republic was another marker in our long journey out of bondage to freedom. But as the classic calypso advised – “the journey now start”.

The Movement for Social Justice (MSJ) greets our fellow citizens of Trinidad and Tobago on this the 45th anniversary of our nation becoming a Republic. Becoming a Republic was another marker in our long journey out of bondage to freedom. But as the classic calypso advised – “the journey now start”.

The 1976 Constitution that brought The Republic of Trinidad and Tobago into existence really established the First Republic. We in the MSJ are the only ones who make this distinction. Everyone else takes it for granted that the Republic will remain the same for all time. We disagree. In all aspects of life and human endeavour change is the constant. As we have been forced to learn even viruses change and evolve from one form to another variant! The cars that we drive, the phones that we use, the medicines and medical procedures that doctors prescribe and use, the methods of teaching – all these change. They evolve! Sometimes the change is revolutionary, other times it is a simple updating. Regardless of the magnitude of the change we accept this as part of the normal process of development.

The Trinidad and Tobago of 1962 when we became an independent nation and the nation that became a Republic in 1976 looks very different from the T&T that we know today. But what hasn’t changed is the system. The relations of economic, political and social power remain essentially the same. There are a few controllers of that power and then there are the rest of us, the people. Those in government control political power. The owners, managers of big corporations and the super wealthy, control economic power. Our political culture hasn’t changed – we have two traditional parties who fight to win control of political office by appeals to race and religion and they depend on political investors to finance their run for office, expecting to get returns on that investment by big contracts often obtained corruptly.

The fact that our systems haven’t changed is at the root of our many problems today. Take the story of the day – the Police Service Commission and the appointment of the Commissioner of Police. The MSJ has made several statements on this. Indeed a month ago we pointed out that the very Legal Notice 183 of 2021 under which Mr. Griffith was appointed to act as CoP was legally questionable. This has now being confirmed as being the case. We queried the functioning of the PSC and also stated that the Attorney General could have been at fault with LN 183 of 2021. In subsequent statements we pointed to the need to fix the process as laid out in the Constitution for appointing a CoP and said that the process should not be tainted by political interference.

We described the situation as a twilight zone. In this regard the MSJ was spot on. More importantly, however, than us being right about this very messy and disturbing affair is that it should tell all of us that something is not right in the Republic. Some of us may deny that this is so – but just look around. The proof is there! Our Parliament fails to represent what, we the people, wish to see happen. Our criminal justice system is so bad that in a well publicised case, it took 15 years for a murder trial to take place and be completed. The Service Commissions are not working. The Cabinet makes decisions without any input or discussion with citizens and their representative organisations. The two parties in parliament attack each other so viciously that they have created poisoned wells of supporters so that the country will never come together to tackle a national emergency like the Covid pandemic.

Many of our citizens have lost hope. They no longer believe that better days are coming or that anything will ever change. Cynicism has replaced confidence. Those who can, migrate, especially our talented young people. Most can’t. Many are worn down with the pressures of life – where to get money to put food on the table; where to get a wuk; how to help the children get the things that they need for school; how to pay all the bills.

Neither of the two parties in parliament offer any answer to the question - what is the way out? The Opposition attacks the Government by calling them all kinds of names, but does not realise that to take the sliver out of the government’s eye they first have to take the beam out of their own eye. The Government boasts of how much they are doing yet they don’t understand what it’s like for the majority of citizens today and how much pain people are going through.

The systems of the First Republic are broken and it’s resulting in broken lives. The First Republic is now 45 years old. It needs major change. It’s time to evolve! It’s time for the Second Republic. Who will bring about this change? We the people must! This is our message on Republic Day. 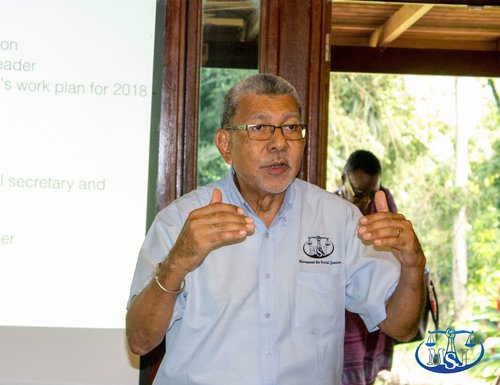