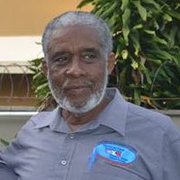 Clyde Callender is a retired oilworker. He went to St. Benedicts College La Romain and in 1962 after finishing school went to work at what was then Texaco Pointe a Pierre, where his father also worked. Clyde worked in the Oil Stocks and Custody Transfer department at Pointe a Pierre, moving up to the position of Supervisor prior to his retirement in 2003. However, it was as a Union activist that Clyde is best known at Pointe a Pierre. He held many positions at the local branch level – Shop Steward, Committee Member, President of the hourly/weekly branch, President of the monthly paid branch; and finally President of the branch that represented all the workers when the hourly/weekly and monthly paid branches were merged. Clyde made a vital contribution to human resource development in Trinidad and Tobago when he championed the cause of having substance abuse treated as an illness rather than a disciplinary problem. This led to Petrotrin establishing its Employee Assistance Programme (EAP).

Clyde has also been an activist for the improvement of his community – Plaisance Park. He served as both the Secretary and President of the Plaisance Welfare Council. Active in sport as well, Clyde was the Manager of the Black Hawks football team and served on the Southern Football Association.

Clyde has been involved in progressive politics and in the 1977-81 term of local government represented the original United Labour Front as an Alderman in the Victoria County Council. He also represented his Union, the Oilfields Workers’ Trade Union, on the Board of Palo Seco Agricultural Enterprise Ltd from 2003-2010.

Clyde Callender is the International Relations Officer of the MSJ and has been for a number of years the President of the Trinidad and Tobago Friends of Cuba.