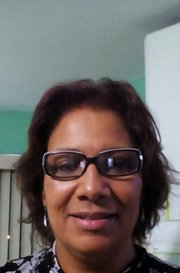 Ms. James is a foundation member of MSJ who holds the position of Elections Officer. She previously held the position of Assistant Deputy Secretary. She is a former pupil of Bishop Anstey Junior School and a past student of Bishop Anstey High School. Ms. James was actively involved in Music at her alma mater as a member of the School choir, and as a soloist in the National Music Festival. She later joined the Lydian Singers after being coached by Joselyne Sealy.

During her tertiary, academic period as a student of Management Studies at John S. Donaldson Technical Institute, Ms. James’ developed an interest in voluntary work. She became the First Youth Board President of Cathedral Credit Union in Trinidad & Tobago, and the Caribbean. She was a member of the Supervisory Committee, and served as Secretary and Vice-President on the Board of Directors. She left Cathedral Credit Union to complete the Advanced Diploma in Business Administration offered by the Association of Business Executives (ABE), which she successfully completed. Additionally, she attained a Certificate in Introduction to Child Psychology, from the University of the West Indies (UWI), School of Continuing Studies.

Currently employed at Telecommunication Services of Trinidad and Tobago Limited, (TSTT), Ms. James is highly competent in the areas of Customer Service, Human Resources, and is a member of the Job Evaluation Project Team. She is an elected Members’ Representative on the TSTT Pension Management Committee, and has actively served as an Alternate and as Members’ Representative for approximately 8 years. She is also a Branch Officer of Communication Workers Union (CWU, which is the recognized majority union for TSTT), and has been involved in various Committees over the years; Standing Orders, Disciplinary, Elections, Pension, Education. At present, she is on the Negotiating Team.

Possessing diverse, academic, and professional competencies, Ms. James is a mother, entrepreneur, and a Director of a family-owned, stationery business. She embodies the philosophy that everyone should count and is passionate about serving others. She strives to add value by working with others to achieve their full potential through personal development.