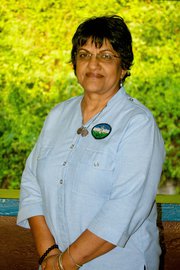 Radhaka Gualbance was born in Santa Flora, a small community in the southern oil belt.. She comes from a family line of community activists and entrepreneurs. Her grandfather was recognized for his contribution to the development of Culture and Sports in the Region in the 1960s. A parcel of land was given to the Community by him and it was named in his honour - “Subnaik Park”.

Radhaka attended Iere High School in Siparia and was recognized for leadership and debating skills. While studying at UWI, St Augustine, she became involved with Amnesty International and remained a volunteer for ten (10) years. During that time she held various positions including that of President of the Trinidad and Tobago chapter and was the local Campaign Coordinator in the organization’s international campaign “Against Apartheid”.

She was the first “female” Lion at the Siparia Club where she got the Club involved in a regional drive for eye testing and delivery of glasses. Her short career as a teacher brought much added value and a greater understanding for poor and disadvantaged.

She taught at Malick Secondary School and at Siparia Junior Secondary School. At the latter, she was very involved in the de-shifting process and was also an active member of the school Parent Teachers Association. Much of her career was built around Research and Delivery of various levels of Poverty Reduction Programmes. Currently, she is self-employed and continues to be of service to various communities working with the MSJ’s social work team.