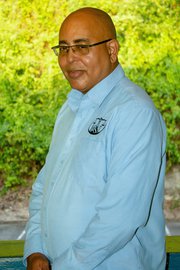 Gregory Fernandez is a businessman with a commitment to social justice and national political and economic independence. Gregory was not always a businessman but was once a teacher and trade union activist, a political activist of the Committee for Labour Solidarity (CLS), a cultural activist (as a former board member of the artiste coalition), an impresario (one of the founding members of the International Soca Monarch competition(ISM)), a former student guild president of the University of the West Indies, and an organiser of a football league for youths at the tender age of 14, among other roles.

During his years at the UWI at which he did Management Studies, Gregory at the age of 20, was a leader of a strike among students in support of student and worker rights at the university which resulted in the UWI campus being shut down for several weeks. Soon after leaving the UWI, and taking up the profession of teaching which he loved, Gregory Fernandez was fired for taking up a health and safety issue for teachers at the school where he taught in 1985 and was not restored to his teaching position for some 5 years, until finally winning his case in court. During this time Gregory took to his interest in computer software and founded a software company with some of the proceeds from his case in 1991. His aim was to build an indigenous software company in the Caribbean that can take on the world. After 25 years in business he continues to pursue that dream. During the same period together with William Munro they founded the ISM which during his period at the company eventually grew to be the largest show in the Trinidad and Tobago carnival. Despite his progression in life, with 3 beautiful daughters and one super granddaughter, Gregory has never given up his participation in political life and the fight for a better Trinidad and Tobago.

After more than 38 years as an activist he remains committed to the principles and the fight for Social Justice and national economic and political independence.